Hunter supports Firefighter Cancer Awareness Month currently being promoted internationally, and the efforts being made across the UK and Ireland to improve the future long-term health outcomes for our firefighters. Recent ground-breaking research revealed the serious health risks to UK firefighters following exposure to toxic fire effluents, the chemicals emitted during a fire, in an independent University of Central Lancashire (UCLan) report commissioned by the Fire Brigades Union (FBU). 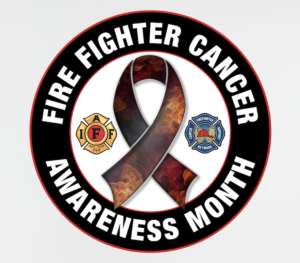 The work is a UK first and the latest in a growing body of international evidence suggesting an increased risk of firefighters developing cancer and other diseases. Fires produce a cocktail of toxic, irritant, and carcinogenic chemicals in the form of aerosols, dusts, fibres, smoke and fumes or gases and vapours.

The report includes a summary of UCLan’s testing on-site at 18 fire stations as well as over 10,000 responses to a national firefighter survey run jointly between the FBU and UCLan.

Indoor air testing at a number of fire stations and training centers highlighted that UK firefighters are still being exposed to the high levels of toxic contaminants during and after a fire, as cancer-causing chemicals remain on PPE clothing, equipment, and elsewhere at the fire ground. Test samples revealed carcinogens inside firefighters’ helmets, on PPE, and even on breathing apparatus mask filters.

More than 10,000 currently-serving firefighters were surveyed in order to better understand UK decontamination practices and the prevalence of illness, revealing:

The problem of firefighter cancer is not going to go away until we collectively address the problem and protect the immediate and long term health of our firefighters.

At Hunter we work with industry experts and operational fire service personnel to understand the challenges they face and to identify opportunities for us to develop new products or services that will directly improve the long-term health outcomes for firefighters. Our HunterCARE® and HunterCARE® platinum + services have been designed to improve the short and long-term health outcomes of the firefighters we serve as well as improving their operational resilience.

Keep an eye out for more content coming from us throughout the rest of the month on how Hunter supports the UK and Irish fire services.

If you would like to find out more about our HunterCARE® our UK & Irish-based laundry and decontamination centers, HunterPAC® our award-winning managed service solution, or Firehunter® our range of industry-leading PPE, workwear, and footwear solutions please contact us below.