Following Simon’s success in winning the Northern Ireland Director of the year award for family business, Simon was one of only six on the shortlist for the UK National awards of Family Director of the Year 2012.

Open to directors across the business spectrum, the IoD Director of the Year Awards takes the winners from the local IoD Director of the Year Awards around the UK, and determines through a comprehensive judging process who is the best of the best in British business. Winning these awards demonstrate that you have been recognised as the best in your field by the organisation for business leaders, the IoD.

The Institute of Directors, have been supporting businesses and the people who run them since 1903. As the UK’s longest running organisation for professional leaders, they are dedicated to supporting our 38,000 members, encouraging entrepreneurial activity and promoting responsible business practice for the benefit of the business community and society as a whole.

“The past year has not been an easy time for business. The economic environment remains very challenging and the public’s perception of the positive contribution of business to society has been damaged. These awards seek to highlight the achievements of some of the UK’s finest business leaders, and affirm our belief that business is a force for good.”
Simon Walker, Director General, IoD

Hunter Apparel Solutions Ltd is one of Derry~Londonderry’s oldest company’s having been established in 1936 and having celebrated their 75th year in business in 2011.

Having previously worked as the Sales Director for Hunter Apparel Solutions Ltd., Simon grew sales on average 20% annually for 7 years in a row. In 2009, Simon Hunter became the third generation of the Hunter family to take on the Managing Director role.

The company entered a difficult phase as Simon took on the Managing Director position as the economy was sliding into recession and he was faced with difficult decisions almost immediately.

Not only was the economy difficult, but there was a global cotton crises (cotton prices increased by 120%) which affected the input prices; while in the Far East (where much of the company’s product is made) labour rates were soaring. With fixed price selling contracts this was a perfect storm for the Company and Simon had to sort this out and decisive action was required.

Simon had previously set himself a goal of company diversification from manufacturing and importing shirts, (which was the company’s business when he started under the name Graham Hunter (Shirts) Ltd.) to becoming a managing agent (one stop shop) for all uniform and footwear needs using a web based procurement model. This was achieved over the course of 5 years.

Simon Hunter, Managing Director for Hunter Apparel Solutions Ltd said “This award is a huge honour. I was genuinely shocked to make the UK shortlist of 6 Director’s. Our sector is not an easy one to trade in, so it remains a constant challenge for me. It is highly satisfying to have my efforts acknowledged at a National level”. 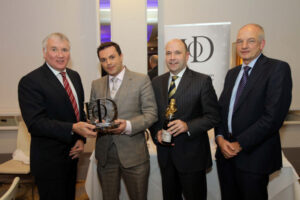